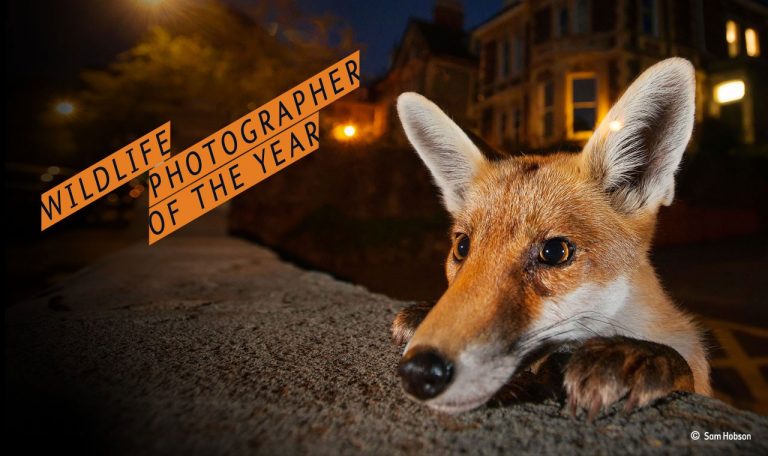 This years awards feature a multitude of talented photographers, such as Yongqing Bao from China or Cruz Erdmann from New Zealand, who won Wildife Photographer of the Year and Young Wildlife Photographer of the Year respectively. The 20 categories from which an award is to be won, range anywhere from Animals in their environment, to plants and fungi, are very well represented this year with a distinct winner in each category. Bellow, I will discuss the winners and their photos. Enjoy!

This photo portrays a Tibetan fox moments before attacking a marmot, in the himalayan mountains. From far away, this scene played out in slow motion in front of Bao’s eyes.

Fen took this aerial photo on the snow covered Kumukuli desert in China; of a herd of chiru anterlopes.

This photo was shot by accident as Biswas didn’t anticipate to find this intruder to be his subject while observing a colony of ants.

This under-surface shot protrays a migration of frogs in southern Italy.

This photo of a golden eagle took Rikardsen 3 years to take since the bird was getting used to the presence of the camera for so long.

Kronauer tracked this colony of nomadic army ants in a Costa Rican forest, capturing them as they were building their shelter.

This photo showcases a guanaco being attacked by a Puma, playing out in Patagonia, making this the first detailed capture of such an encounter.

This Monterey Cypress tree was found by Kovarevic in California, covred in orange-colored alge and gray lace lichen, which she beautifuly captured.

This extensive deep sea colony of garden eels; Doubilet shot remotely whilst hiding behid a shipwreck, since the animals are so hard to capture.

This image of wild rats shot in NYC was originaly shot for a National Geographic story on the rodents, for which Hamilton lured the rats to his camera to take it.

The hot lava from the Kilauea volcano races towards the waters of the pacific ocean as Vilarino peeks out of his helicopter and frames his shot.

This is a lone bison during a snowstorm captured in Yellowstone using a slow shutter speed to blur the snow and excentuate the simplicity of the shot.

This projection of a Mexican Jaguar onto the US-Mexican Border is a political statement about destroying animal’s natural habbitats.

This series of Japanese Macaques shot for National Geographic depicts monkeys performing on stage and back stage as well, in the heart of Japan.

These two male Dall sheep encounter each other in a clash. Villet battled strong winds, heavy snow and bitter cold to capture this wonderful shot.

This isolated penguin couple made it’s way into Christmann’s viewfinder as part of his collection.

Observing the Hummingbird, Thomas put his camera to the test and captured the snappy animal mid-drink.

These animals are masters of camouflage so Cruz was lucky to have spotted it at all in the shallow waters of Bali.

Riccardo captured this shot of a gelada mother and her baby after waiting hours before surise to catch a glimpse of the animal.