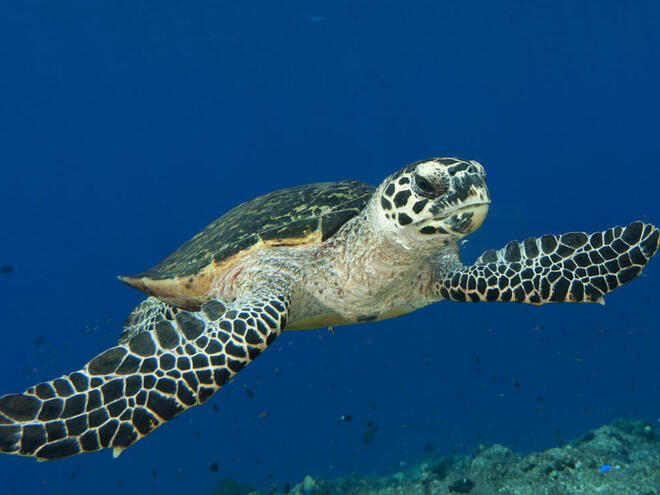 Image courtesy of the WWF

Since ancient times, hawksbills have been hunted for their beautiful shell which is made up of colorful overlapping scales in shades of gold and brown and orange, called scutes. The scutes are polished and used to make combs, jewellery, sunglasses, ornaments, and other luxury and decorative items. Commonly referred to as tortoiseshell, or “bekko” in Japan, the illegal trade of hawksbill shell has pushed it to the brink of extinction. In Japan, bekko combs are still worn as part of their traditional wedding dress.

In 1977 the trade of hawksbill shell was prohibited by the Convention on International Trade in Endangered Species (CITES). CITES is an international agreement to which voluntary parties (countries) adhere to. At this time, hawksbills were listed on “CITES” Appendix 1 which includes species threatened with extinction. Appendix 1 allows for trade of hawksbills and their parts only as permitted in exceptional circumstances. Currently 183 countries are members of CITES.

In 1980, when it joined CITES, Japan took an exception to the hawksbill trade agreement and the turtleshell trade continued. Known for their bekko artistry dating back to 1700, it’s estimated that Japan imported two million turtles between 1950 and 1992 to supply the industry. Due to continued international pressure, Japan agreed to stop importing hawksbill shell in 1993, however stockpiles of shell remained.

Though the importation of turtleshell items is illegal in the United States these items are the most commonly intercepted products by US Customs agents from tourists returning home from the Caribbean. The Japanese bekko industry remains intact. Recent surveys in Latin America have shown the broad availability of these products; in Cuba, roughly 70% of shops offered turtleshell and in Nicaragua, the products were found in more than 90% of souvenir shops. The US is the world’s second largest market for illegal wildlife products and tourists who purchase them abroad and bring them home often don’t realize they are contributing to the decline of a critically endangered species.