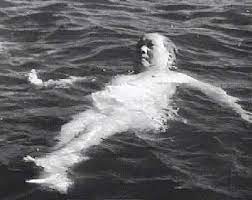 When thinking of the man responsible for the most deaths in recorded history, you probably don’t picture a “balloon”-like 73-year-old floating awkwardly through China’s Yangtze River, however as this photo depicts, that’s precisely what happened in 1966.

Mao Zedong ruled over the People’s Republic of China from its founding in 1949 until his death in 1976. These years were categorized by massive social and economic changes, seeing the adoption of collective living where all people worked together as the government mandated to make China a world power. The first of these periods from 1958 was known as The Great Leap Forward. In an economic sense, the period saw China grow from a country of farmers to something much more akin to a western power at the time. This came at a massive cost, to the somewhere between 23-55 million people who lost their lives during the period and the millions more who suffered starvation, torture, and disease. By the end of this period, Mao’s popularity was at an all-time low, so he stepped down from leadership for a time. After the condemnation of Stalin’s leadership following his death in 1953, Mao knew he needed to secure his ideology and image in the minds of China’s people, so he did what he knew best.

Mao had always considered swimming to be one of his favorite pastimes, with him supposedly learning to swim at a young age in a pond on his father’s property. In 1956 prior to the Great Leap Forward, Mao swam in China’s rivers three times as a show of his health, but also on an ideological level, using the swim to show China that “big things” like US imperialism could be conquered.

In another incident in 1958, Mao met with Nikita Khrushchev, Chairman of the Soviet Union. During these discussions concerning the future of Sino-Soviet relations, Mao invited Khrushchev to hold a meeting in Mao’s personal swimming pool. This while again comical, had a very strong message as Mao was asserting his power both figuratively and literally over the floundering Khrushchev, who didn’t even know how to swim.

Returning to a sunny July day in Wuhan in 1966, the 73-year-old Mao took to the “smiling” waters of the Yangtze River surrounded by thousands of young swimmers with propaganda promoting his greatness filling the river. The event was recorded and highly publicized with Mao reportedly swimming 15 kilometers in 65 minutes. This combined with the images like the one above provided great comedy for many in western nations, however, some recognized it as a sign of things to come. At home in China, the swim was a massive success, boosting Mao’s popularity back to previous highs, which would allow him to conduct the nationwide Cultural Revolution later the same year.

Interestingly, swimming seemed to have become a tradition among some Chinese Leaders, as Mao’s successors including Deng Xiaoping, Jiang Zemin, and even Xi Jinping have all stated a fondness for swimming, particularly in an attempt to show their strength. Zemin even conducted a publicized swim in Hawaii in 1997 to little effect. While none of these leaders have managed to successfully replicate the political effects of 1966, the swim clearly holds a place in Chinese culture. The anniversary of the 1966 swim is celebrated every year with thousands of swimmers and artwork of the Great Chairman of the River once again.

“A Fascinating Look At The 1966 Chinese Cultural Revolution | Our History.” Youtube, uploaded by Our

Heaver, Stuart. “Chairman Mao’s historic swim – glorified in China but ridiculed by the rest of