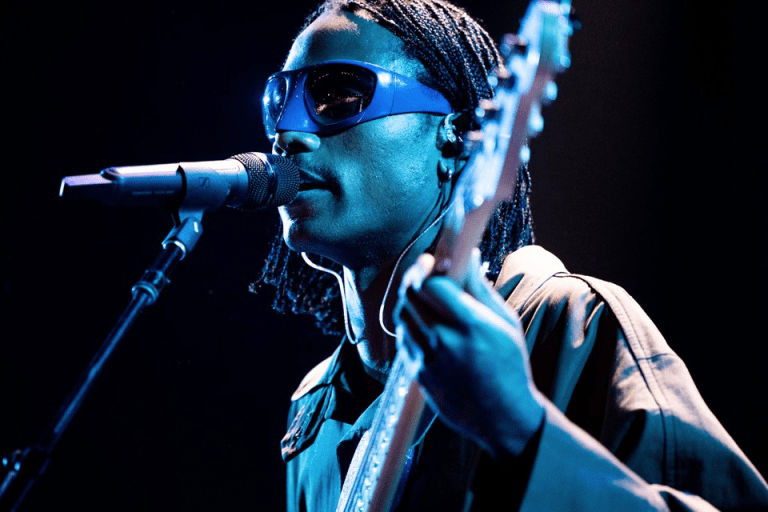 In the past months, you have likely heard the name Steve Lacy floating around. This is due to his breakout single “Bad Habit” off of his sophomore album Gemini Rights rocketing him to stardom and hitting #1 on October 3rd. This was Steve’s first taste of real fame, as it was both his first #1 song and his first entry into the top 100.

Steve Lacy’s journey to this point of astounding success is a fascinating one, which starts with an iphone, a guitar and a boatload of ambition.

Steve’s rise to fame started from humble beginnings, as the guitarist for alternative RnB band The Internet in 2013. He co-produced 8 songs off their beloved album Ego Death (2015).

Through his newfound recognition, Steve released his debut EP, Steve Lacy’s Demo (2017). Produced mostly on an iphone in the app garageband, this EP demonstrated Steve’s competency as a solo artist. Songs like “Ryd” and “Dark Red” are wonderfully funky love songs which feature a charming demo aesthetic.

The world was starting to take notice of Steve Lacy.

Once Steve had his fans hooked with his demo, he made his return two years later with his debut studio album Apollo XXI. Apollo saw Steve experiment in unknown territory, over crisper instrumentation and a longer run time. Apollo XXI feels like basking in the glory of a clear sunny day. Warm guitar chords and Steve’s boyish charm shine on songs like “Only If”, “Hate CD” and “N Side”. He also displayed his competence as a songwriter with ballads like “Lay Me Down”, and pulled on heartstrings with songs like “Love 2 Fast”. Apollo XXI was an important step forward for Steve, and proved his potential.

In 2020, Steve returned to his roots with The Lo-Fis. This album is a return to the raw, jazzy charm of Steve Lacy’s Demo. Although a great listen, it was clearly made with fun in mind and did not come off as a fully developed project.

The full fledged album that fans were thirsting for came in the form of his second studio album Gemini Rights in July of 2022. Here, we see Steve’s full potential blossom. Gemini Rights is the perfect summer album. The songs are infectious and catchy, without sounding formulaic. Gemini Rights is short, with a runtime of only 35 minutes stretched over 10 tracks. Despite the length, it does not fail to satisfy. The opening track “Static” is minimalistic but tasteful, with captivatingly simple piano keys and buttery vocal harmonies. The star of the show, “Bad Habit” is not your average radio hit. Steve stays true to himself, with a catchy hook, nostalgic guitars and a clean switch near the end of the song. “Mercury” is a fascinating blend of alternative RnB and Bossa Nova, making for a fresh and captivating listen. “Helmet” and the closing track “Give You the World” are soulful tracks that are as emotionally resonant as they are well done. Steve covers relatable themes such as feeling trapped by your lover, learning to value yourself and feeling regret in past decisions. The songs never overstay their welcome, and are a perfect blend of raw emotion while still sounding mature.

Steve Lacy has come a long way from his days of iphones and demos. However, he has never lost sight of what makes his music charming and unique. Gemini Rights is more than just a bundle of hits, being his most well developed and cohesive album yet.

More albums to check out: