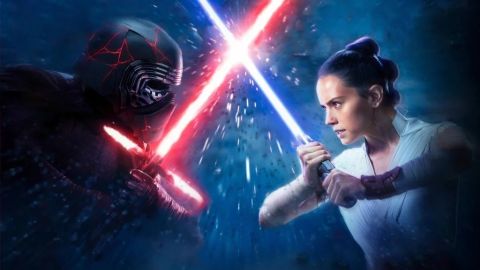 Star Wars is everywhere. It’s in our speech, our memories, our hearts, and generally serves as an escape to a fantasy world where good will always prevail. So, you can imagine everyone’s excitement when Star Wars Episode 9: The Rise of Skywalker was announced to be released in theatres in December 2019. Now, I know that it’s two months late, but I just got here, and I want my chance to talk. The hype had been built, the rumours had been spread, and now, it was the time to watch the movie. So, was the ‘epic’ conclusion to the cornerstone of film culture really what it was hyped up to be?

In my humble opinion, no. As a standalone movie, this film would have been alright. But as the conclusion of 42 years of film, this movie did not live up to the hype. While many people may blame the breakneck pacing of this movie, the way it skips past plot points faster than an IB student skips past important details in a question (totally not speaking from experience), and others blame the director, J.J. Abrams, for the way that he portrayed the characters and how he ‘screwed up’ the movie, I wish to argue for another side: I believe that the fans were the reason this movie ultimately flunked in the greater picture. Fans of anything tend to get really emotional when there is a slight or major change in anything they like, and one such example for this would be the fan backlash for Star Wars Episode 8: The Last Jedi. The rampage that occured in the following weeks and months might have been all electronic, but by God was it filled with raw emotion. The incessant Tweets ranged from topics like “Rose is a bad character” to “Luke is not the way I remember him, so he’s bad” to “Why did Cantobite even exist” and on and on and on. So what does this have to do with how Rise of Skywalker was received by fans and critics alike? Well, Disney sure does seem to have repeated the process of the previous episode, but not the exact same. Instead, we have a movie that either retcons everything about The Last Jedi or we have simple blatant fan-fiction, pretty much the opposite of what The Last Jedi tried to do.

If I had to describe this movie in one word, it would be cowardly. As I previously stated, Disney and Lucasfilm seemed to have played it so safe you wouldn’t even recognise the story if you didn’t have these iconic characters such as Luke, Chewie and Leia in it. In fact, the fact they played it safe and pretty much were beaten into submission by the fans of the saga meant that a lot of the good aspects from The Last Jedi, which I personally think is a flawed movie, were reverted and retconned in Rise of Skywalker. Does anyone remember how the whole plot of the last movie revolved around fuel? Well, in this movie, you are expected to believe that an X-Wing that has been submerged on an island for 30+ years still has enough fuel to fly to the deep corners of space. How about Snoke? Anyone remember him? The intimidating archvillain of The Force Awakens who turned out to be a mere “all bark, no bite” villian in The Last Jedi? Well, here it’s revealed that Snoke is actually a test tube baby that Palpatine created to control the First Order from the shadows (more on Palpatine later). How about Rose Tiko? The escape pod guard that became one of the main characters of the movie overall? Well, now she has less than 90 seconds of screen time. Charlie from Lost has more lines in this movie than Rose Tiko does. Why, you ask? Because we all bullied and beat Disney and Lucasfilm into submission. And look at what we’ve created.

Perhaps the aspect where Disney and Lucasfilm failed the most is the retconning of perhaps the biggest reveal of The Last Jedi: Rey’s parentage. In the first movie of the Sequel Trilogy, Rey’s parents are left in darkness, as the movie was mainly an homage to A New Hope, and Luke’s parentage was also shrouded in shadow. Now, if The Force Awakens is an homage to A New Hope, then The Last Jedi should feature some sort of reveal for Rey’s parents, like Luke in Empire. Well, we didn’t get that. Instead, we got the reveal that upset people the most: Rey’s parents were nobody. While many people left the theatre in rage due to this, I was personally not bothered because it would make the universe way smaller if Rey was related to someone else we knew. Think about it. Was Obi Wan Kenobi related to a famous person in the galaxy? What about Yoda? Or maybe Anakin Skywalker himself, the character that the entire saga is named after? But then, in the newest movie we find out the truth: Rey is, in fact, Palpatine’s granddaughter. Personally, this was one of the worst parts of the movie for me, because while The Last Jedi was a very flawed movie, the reveal of Rey’s parentage opened the universe to a wide variety of options for more movies or simply more storytelling options. But now, we have the reveal of Rey’s family tree having consisted of Palpatine, who I also feel was underwhelming in this movie. It seems obvious that the plan for this movie never included Palpatine, but due to fan backlash, he was brought back. While Ian McDiarmid is just having fun with the role, the way Palpatine enters and exits the movie were subpar at best, while he was kept out of all other parts of the movie, despite being the most anticipated part of the movie.

In conclusion, I think that Star Wars Episode 9: The Rise of Skywalker was a movie that is very much in the same vein as the polarising The Last Jedi, but this discussion can be settled quickly: The movie was underwhelming and under delivered in many aspects. Some positive aspects would include the cinematography and the set pieces, which were original and felt like a true homage to the idea of Star Wars. If you want to go more in depth into this movie, I suggest you watch the videos detailed on the links provided on the next page, which not only emphasise my point, but also provide entertainment and other ideas that I could not share. So, would I consider this movie to be good, even after writing this entire review? The answer is still no, and I think it will remain this way to the end of time.