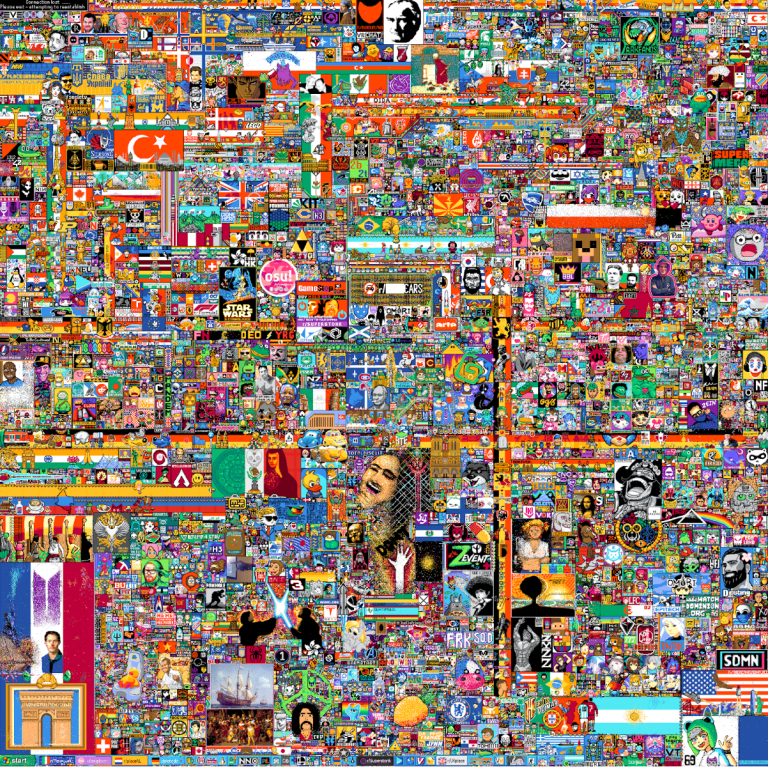 On April 1st, 2022, the social media platform, Reddit, re-opened r/place again for the first time in 5 years for April Fools. But what is this social art piece? We will explore how this embodiment of internet culture developed, and look at some of our favorite creations.

r/place was a collaborative project, where over the course of 3 days, 5.4 million participants had the ability to place one pixel of the limited colors below on a 1000×1000 (later 4000×4000) canvas, with every individual placing one every 5 minutes. This followed the same format as the experiment in 2017, with the exception of a shorter time between placements.

What followed was a mad dash by various communities to claim a space for their own artwork. Many of the main features of the previous project such as the blue right corner and “black void” quickly sprang up alongside many national flags, the largest of which being a Ukrainian flag which would stand in support of Ukraine in the ongoing war until the end of the project. Even after two doublings of the canvas area, constant wars of attrition raged between communities in an attempt to gain and maintain valuable pixels to represent their communities. The question to all users was whether to create or destroy.

This was seen particularly with influencers who utilized their armies of followers to create and destroy, as well as bots which were set up to maintain certain areas, both of which were particularly contentious among some participants who saw their use as counter-intuitive to the point of the project.

The project began its end around 11pm GMT, 82 hours after it began when users became unable to place any color other than white. The next hour saw the canvas engulfed in a “white void” with the canvas’s own creators being the ones to destroy it.

As a social experiment, it’s quite interesting to see how groups of people were able to work together rather than creating a mass of unorganized pixels as everyone tries to make their own designs. Some alliances were even formed between previously warring communities, usually represented by a heart between their sections of the canvas. The prevalence of flags on the canvas despite the lack of organized communities is also an interesting detail, albeit beyond the scope of this short article.

r/place was an awesome embodiment of the culture of the internet, whether you interpret it as a monument to mob mentality, the cooperation of humans, or just a fun communal art project some people probably spent way too much time on. If you’d like to see some of it yourself, place atlas provides a timeline of the canvas, as well as explanations for the various artworks included in it. There is some inappropriate content, as is inevitable in a project like this, so be aware of this when combing through the canvas yourself. Finally, below we’ve also included some of our favorite works and moments from the event. You may need to open the link to see the full image.

The Conversation: How r/place – a massive and chaotic collaborative art project on Reddit – showcased the best and worst of online spaces