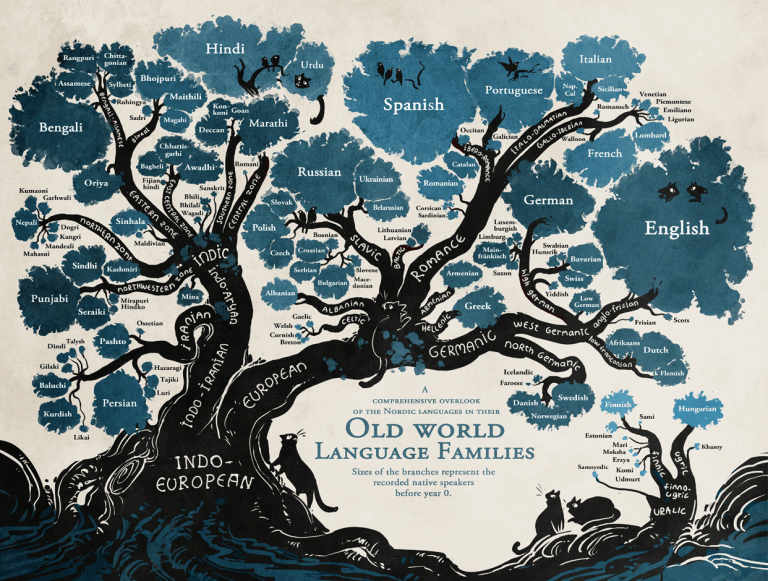 From the unique symbols of the Latin alphabet to the delicate intricacy of strokes composing Chinese characters, one is left to wonder: where does all of this come from? What inspired the arbitrariness of sounds forming the words that so easily roll off our tongues? With these languages continuously exceeding in number and diversity across the globe, do they still manage to find common features with one another? To much surprise, however, languages are still alike in that they are structured through grammatical rules, are influenced by societal factors, and their evolution is shaped by historical events.

All languages have grammar—rules and patterns in morphology and syntax—and certain approaches towards semantics and pragmatics.

Since both French and English are heavily influenced by Latin, several words from the two languages will have embedded Latin roots that give these words their meaning. To illustrate, the Latin root word lev (to lift) is found in the English word “elevator” and in the French verb se lever (to get up); the root port (to carry) can also be seen in the English word “import” and the French verb porter (to carry); and the Latin root terr (earth) is shown in “terrain” and the French word for “earth,” la terre.  Therefore, knowing some root words proves useful to be able to deduce the definition of unfamiliar words. In fact, it is likely that modern languages sharing a common ancestor also share root words, which may lessen the challenge of language acquisition (Nordquist).

Various social and demographic factors, such as age group, culture, and linguistic discrimination contribute significantly towards one’s linguistic choices and how languages evolve.

Considering that today’s culture has grown more accepting and diverse in terms of gender, it would be natural to develop vocabulary reflecting this. Hence, nonbinary terms were created to accommodate the range of gender and sexual identities and make languages more inclusive. For instance, English has only had masculine or feminine singular pronouns, so the plural pronoun “they” was altered to also be gender-neutral. In 2019, the Merriam-Webster dictionary added “they” as a pronoun to refer to a “single person whose gender identity is nonbinary.” Several style guides such as that of the Washington Post and the highly reputable Associated Press Stylebook have made these changes in preceding years. Additionally, concerning languages like Spanish that use gender-based nouns, young people decided to shift from the binary terms “Latino” for males and “Latina” for females into the gender-neutral “Latinx” or “[email protected]” (Berger).

(This is a shorter version of the article. You can read more here.)

Berger, Miriam. “A Guide to How Gender-Neutral Language Is Developing around the

Nordquist, Richard. “Boost Your English Vocabulary with These 50 Greek and Latin