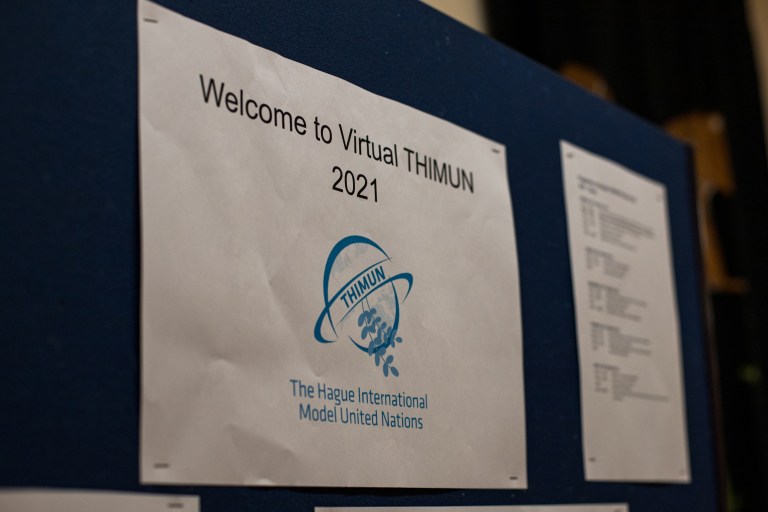 Model United Nations, or MUN as it is more commonly called, is the largest student-led group at the ISB. Students take on the role of policy-makers and represent delegations to debate the contemporary politics that shape everyday life. The purpose of the UN simulation is for students to improve oral and written communication skills as well as cultivate an international perspective and nuanced understanding of global issues.

This year, students from grades nine through eleven were invited to attend a global online MUN conference held by The Hague International Model United Nations (THIMUN). This reputable event which boasts the attendance of thousands of students from 200 different schools each year is usually held in the World Forum Convention Center but was conducted virtually in 2021 for the first time. The conference was open from the 25th to the 29th of January. Students attended the conference virtually from 13:00 to 18:00 at the Reinach Campus. They represented the countries Peru, Myanmar and Panama within nine different committees tasked with the simple task of solving the world’s most pressing global problems.

Ankit (Grade 11) was one of the 25 passionate students that took part in THIMUN for the first time. He represented the Peruvian Delegation in the Disarmament council. Not only was it his first THIMUN conference, it was also his first virtual MUN conference. He jokingly claims that it was a lot more comfortable as he could wear a suit on top and his everyday gym shorts on the bottom. What set the conference apart for Ankit, an active delegate for four years now, was that each committee consisted of 100-200 students from all over the world. Through this event he learned the power of communication and what that means for global problem solving; that sometimes cooperation means giving up something important to you for the greater good. However, the conference was not without its moments of laughter. He recounts a funny moment when the Palestinian delegation quoted Osama bin Laden when discussing free speech, definitely a highlight especially when the chair’s decision came through roughly thirty seconds later.

Katie (Grade 9), part of the Environmental Committee, represented the Delegation of Myanmar after the school’s MUN conferences made her realize how much she enjoyed debating. “THIMUN seemed like a great opportunity to experience similar debates but on a wider scale. I was also aware of the prestigious nature of this conference, so I was fortunate to be given the opportunity.” Particularly as a younger member of MUN, Katie learnt a lot from the MUN veterans attending the conference from all around the world. Although the size of the councils was intimidating at first, Katie was well prepared from BAMUN and MUNTAG to handle the procedure.