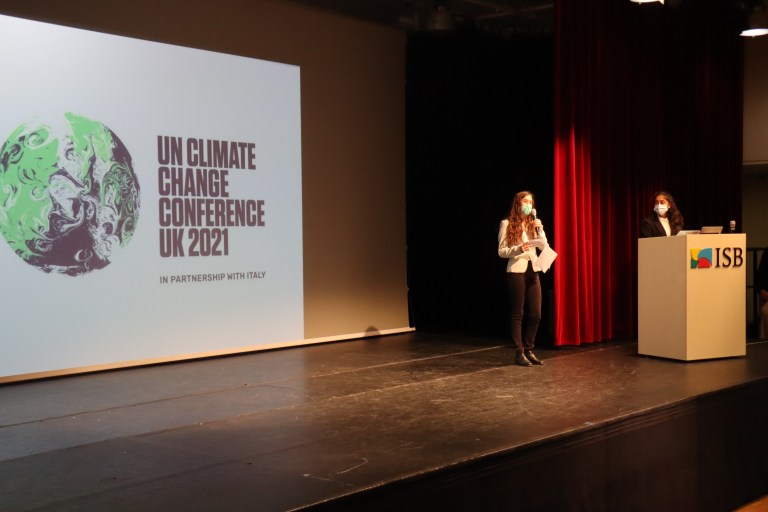 The COP 26 Conference that was held in Glasgow recently could be one of the last chances the world gets to take meaningful action on Climate Change.  In an effort to highlight just how important this meeting is,  ISB decided to recreate their very own COP conference here at our school.  The conference took place on 1st November with students each assigned a different country to represent.

The day started with an Opening Ceremony, with guest speakers such as Kate Chakravarty, who gave us an insight into what the main issues caused by climate change are. Later, students were assigned to 2 separate rooms and the conferences began, with one group looking at how to curtail deforestation and the other encouraging investment in renewable forms of energy.  A debate was then held on the protection and restoration of ecosystems led by the United States of America, who talked about strategies used by them in the past that could be applied to other countries.  Other countries also discussed successful strategies that they wanted to share with other nations such as the delegation of Canada who talked about how they used Satellites in space to monitor change and protect the climate.

The opening speeches in the encouragement in renewables conversations were all filled with interesting facts and insights to the countries and gave everyone a better understanding of what countries were willing to do and what they were already doing. The delegates came up with many different strategies as to how they would be able to find a compromise, with every delegate looking out for their country’s best interest.  But the conference(much like the real one) was not without controversy, with the delegate of China defending their current climate policies and arguing for a solution to climate change that would also see them continue their rapid industrial growth.  Another heated argument boiled over between Costa Rica and Brazil, over the recent deforestation of the Amazon through illegal logging and burning.  These debates, no doubt served to highlight just how passionate our students are and how seriously they took their respective roles.

Despite these quarrels, the conference saw several resolutions to reduce carbon emissions unilaterally agreed upon by the parties.  These involved the phasing out of coal and getting companies to use, trade, and sell renewable forms of energy.  As well as this, another binding agreement saw the countries agree to make the switch to electric vehicles.

Overall the day was a huge success for both the planet and ISB.  Our students were able to showcase their unique sets of talents, their passion, and drive whilst in the process of making others within the ISB community more aware of the vast array of issues Climate Change poses to us.  Let’s hope our real-world leaders can follow the example set by ISB students and ensure a brighter future for the planet!